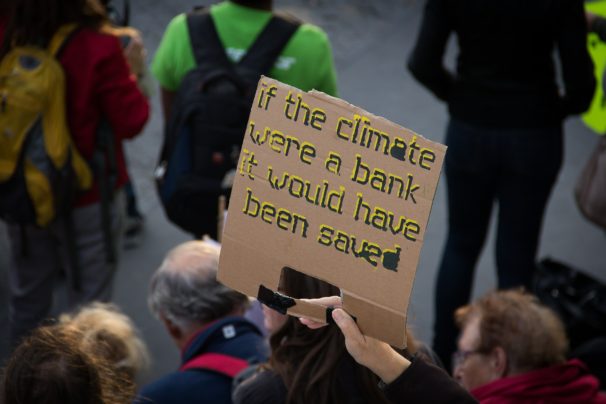 Environmental protests across London have caused massive disruption across parts of London and are set to spread across other towns and cities over the coming weeks and months.

Public protest has always been a legitimate and important part of the democratic process and is enshrined in law. But, how do the police balance the right to protest as against the rights of other people to go about their business unimpeded?

Why are people protesting?

Extinction Rebellion has organised the protests; a group concerned about the environmental destruction of our planet.

Frustrated that other attempts to force change in governmental behaviour have changed, they have resorted to a new form of peaceful protest, on its website they claim:

‘Civil disobedience works when it’s peaceful, respectful, disruptive and undertaken en masse. We don’t want to disrupt people, but our Government’s failure over the last 30 years leaves us no choice. If we had functioning democracies, we wouldn’t need to. We’ve tried petitions, marches, letters, reports, papers, meetings, even direct actions; and emissions have continued to rise. Governments prioritise the short term interests of the economic elites, so to get their attention, we have to disrupt the economy. They have left us with no other option.’

In London the protesters have blocked major roads and bridges, leading to significant chaos and disruption.

What has the police response been?

The Metropolitan Police set out the dilemma in this way:

‘The serious disruption the Extinction Rebellion demonstrations are causing to people in central London and beyond is unacceptable and we completely understand the concern it is causing to those who are disrupted by it.

Ultimately, the Met has a duty to balance the rights of those engaged in protest and who are acting within the law, against the needs and rights of Londoners to go about their daily lives with minimum disruption. Where people are not acting within the law we continue to arrest them, and we anticipate arrests continuing to rise. We are also working closely with partner agencies, Transport for London, British Transport Police, City of London Police, City of Westminster and the Mayor’s Office, as well as the business community.’

‘…we will have had more than 1,000 officers on the streets policing the demonstrations. This is putting a strain on the Met and we have now asked officers on the boroughs to work 12-hour shifts; we have cancelled rest days and our Violent Crime Task Force (VCTF) have had their leave cancelled. This allows us to free up significant numbers of officers whilst responding to local policing. We would also like to reassure people that we have ring-fenced the VCTF so we retain the capacity to deal with any unrelated violent incidents. However, the protesters need to understand that their demonstration is meaning officers are being diverted away from their core local duties that help keep London safe and that this will have implications in the weeks and months beyond this protest as officers take back leave and the cost of overtime.’

Is anyone being arrested?

It is an almost unique feature of this protest that people are aware of the risk of arrest and are willing to be arrested – this ironically presents an incredibly difficult policing challenge.

‘…we have arrested more than 460 people, the large majority for breach of Section 14 [of the Public Order Act 1986) and obstruction of the highway. Of those arrested, so far eight people have been charged with those offences. At this stage it is better for us to keep our resources and custody capacity moving and flexible than leave protesters sitting in cells for up to 12 hours before going to court for what, although highly disruptive, are lower level offences. So everyone else arrested has been released under investigation and will be brought back to be formally interviewed and charged as appropriate in due course. We are aware that means some protesters immediately return to the area to resume their activities; those people will be arrested again.’ (By Saturday 20th April the number of arrests had risen to almost 800).

Will all those people be prosecuted?

This remains to be seen, but potentially thousands of contested prosecutions would place an immense strain on the criminal justice system, so many people think that those released without charge will face no further action.

Are there any legal defences to these charges?

There are several defences potentially available although the lawful right to protest peacefully is not an absolute one, and case law is generally unhelpful. There are some developing areas of legal challenge and these are the ones that defence lawyers will be concentrating their efforts on. Law is a living instrument and must develop as society responds to concerns such as the ones raised by these protestors. We anticipate that there will be a good number of legal challenges flowing from these protests.

People must, however, be prepared to face arrest, prosecution and possibly a criminal record and must individually decide whether that is a price worth paying.

If you need specialist advice, then get in touch with us on 0113 247 1477 or email us at info@osgsolicitors.com and let us help.